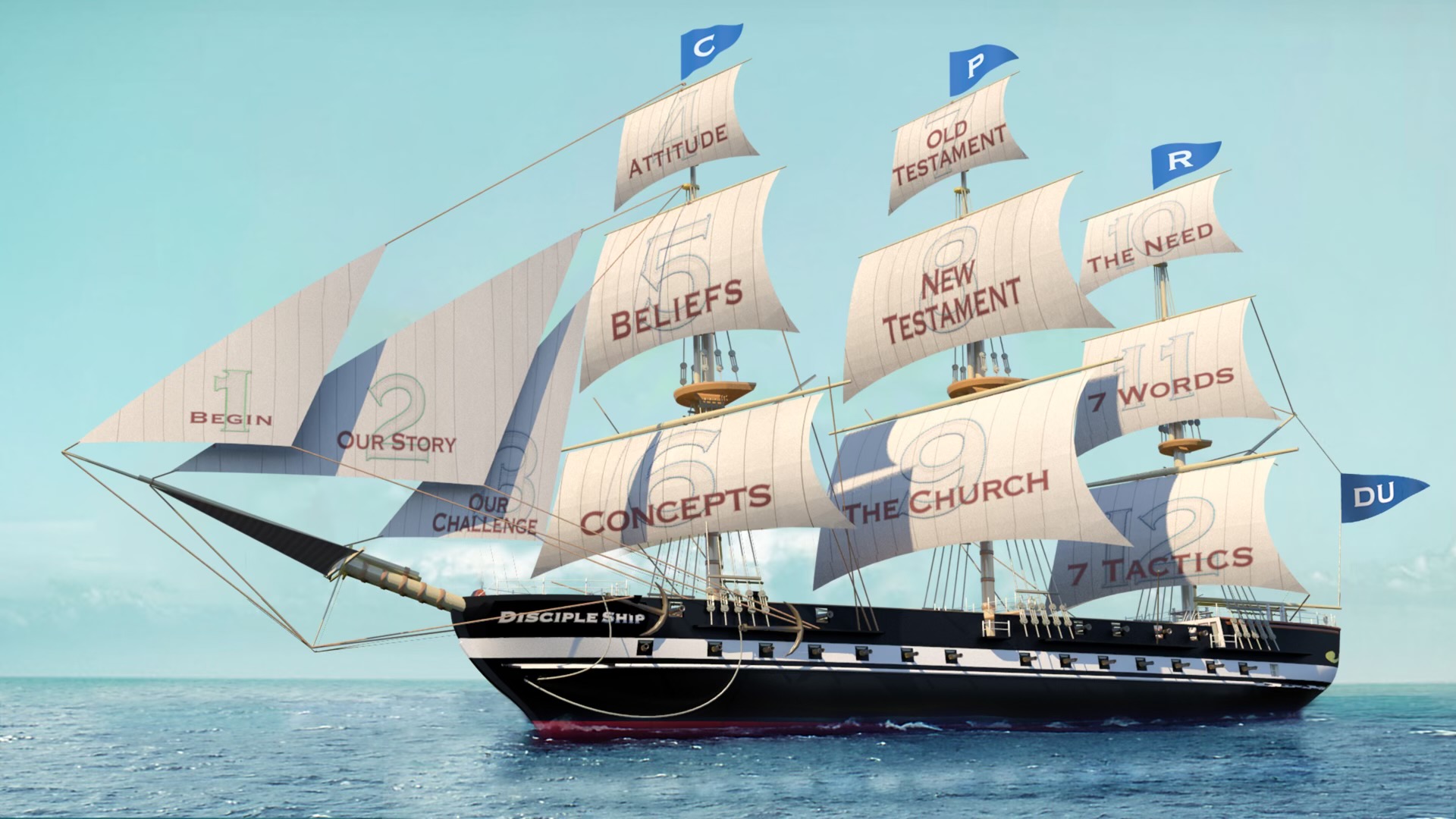 Disciples University is an interesting combination of two words.

The modern university is filled with secular professors that control the agenda. We need to rebuild our universities.

Question: “When the foundations are being destroyed, what can the righteous do?” Psalm 11:3

Answer: “Those from among you will rebuild the ancient ruins; You will raise up the age-old foundations; And you will be called the repairer of the breach, The restorer of the streets in which to dwell. Isaiah 58:12

This passage outlines a discipleship strategy:

We use a picture of a Discipleship as an outline for the discipleship process.

We use a metaphor:  Discipleship is like sailing with a master who controls the winds and waves of life.

NEXT: Sail 2 – A look at some of those who paved the way for this Discipleship Plan.

My name is David Ewald. I have been a youth pastor, school administrator, missionary and a common laborer.  God has faithfully given me many friends who have encouraged me to piece this discipleship plan together.

In the following video we talk about leaders in the last few decades who have Rebuilt, Raised up, Repaired, and Restored God’s truth in our culture.

Please watch the brief overview that highlights leaders who paved the way for us.

We invite leaders to join a network of people committed to spending a lifetime making disciples. “The plans of the heart belong to man, but the answer of the tongue is from the LORD”. Proverbs 16:1

Christainity as a system of truth is Coherent, Comprehensive, Compelling and Compassionate. It is led by people who have Courage, Character, Conviction and Competence.

Our Challenge involves leaders who can pass a three-fold test.

Test 1  – We are looking for those who want to be like an Issachar’s or a Noble Women.

Test 2 – We are looking for those who can lead others to use the CPR 12 Step process.

Test 3 – We are looking for those who understand and can explain the importance of the following eight topics:

Please email info@DisciplesUniversity.com to begin communicating with us. We are praying for you. Thank you for your interest.

Jefferson – What they fail to teach our children about him?

Most children learn that Thomas Jefferson wrote the Declaration of Independence and that he owned slaves. But they never read what he wrote regarding the contest between the master and the slave. In his book: Notes on The State of Virginia he wrote:  “The Almighty has no attribute which can take side with us in such a contest.”

Winston Smith works for the state, and his job is to rewrite history. He comes to see that he knows nothing of the past, of real history: “Every record has been destroyed or falsifed”, he says, “every book has been rewritten, every picture has been repainted, every statue and street and building has been renamed…. Nothing exists except an endless present in which the Party is always right.”

Today, The 1619 Project promotes the teaching that slavery, not freedom, is the defining fact of American history. A total re-write of history.

America is freedom…freedom of speech, freedom of religion, freedom of enterprise. And freedom is special and rare. It’s fragile; it needs protection.     (Thoughts from Imprimis by Larry Arnn, President of Hillsdale College)

Whatever we measure we have more of.

The Flag flying at the back of the Discipleship is a reminder to track you progress.